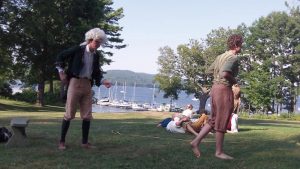 This rollicking and poignant comedy involves mistaken identity, unrequited love, a humorous rivalry between generations, capped off with a perfect comic ending consisting of many marriages that leaves you with a longing for the good ‘ole days.

“Our approach to Shakespeare is playful, physical and accurate to his intent and meaning,” says Co-Director Scott Gibbs. “This shortened version of Twelfth Night will feature both traditional and modern music performed by our actors, who are a diverse group of local high school and college students as well as theatre professionals.” 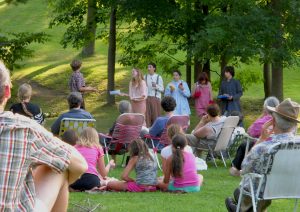 Gibbs’s production partner, Lindsay Pontius, always keeps their young cast on their toes. You might see one unexpectedly climbing a tree or surprising the audience by delivering lines already perched from a tree in the park.  The co-directors are adept at helping their students grasp exactly what the Bard had in mind and demonstrating that for audiences.

Adirondack locations for performances of Twelfth Night will be:

All performances are FREE and open to the public. No reservations required.

The Depot Theatre summer season continues with Greater Tuna on the main stage until August 17. On August 22, the musical, Pete N Keely opens running through the end of the month.
The Depot Theatre is a non-profit, professional theatre located in a historic, functioning 1876 train station in Westport, N.Y., and operates under an agreement with Actors’ Equity Association, the Union of Professional Actors and Stage Managers in the United States. In addition to its volunteer board of trustees, the theatre depends on the support and generosity of its loyal donors, volunteers and community members. Committed to promoting and providing exposure to the performing arts in the Adirondacks, the Depot Theatre invites all to “Take a journey without leaving the station.” The Depot Theatre’s 2014 Season is made possible by the New York State Council on the Arts with the support of Governor Andrew Cuomo and the New York State Legislature.