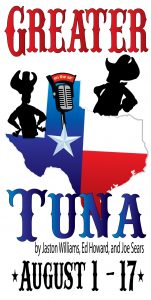 The show is directed by Texas native Chan Harris (Broadway Tours: “Evita,” “Big River,” “Into the Woods”) and stars both Harris and Trip Plymale (Broadway: “The Robber Bridegroom.”) The production is sponsored by Emmet Carter Green Design.

CHAN HARRIS is originally from East Texas, Chan Harris studied music at Juilliard with classmates Renee Fleming, Audra MacDonald and Laura Linney. As an actor, he was cast in several national Broadway tours Broadway including “Evita,” “Big River,” and “Into the Woods”and worked in regional theatres across the United States. In 1999, he directed the national tour of “Forever Plaid.” “Greater Tuna” marks Harris’ acting and directing debuts at the Depot.

TRIP PLYMALE has appeared on Broadway in “The Robber Bridegroom,” and Off-Broadway in “A Funny Thing Happened on the Way to the Forum,” “House of Blue Leaves,” “Music Man,” and others. This is Trip’s second performance on the Depot stage, having first performed in “Damn Yankees” in 1997.

“Greater Tuna” is followed by the musical comedy “Pete ‘N’ Keely” which caps the season with performances from August 22-31.