[This theatre review of “The Bikinis” by Connie Meng was aired and published by North Country Public Radio as “Theatre Review: ‘The Bikinis’ at the Depot Theatre” on July 15, 2015. Listen to the story.]

Jul 13, 2015 – “The Bikinis” provides a terrific musical time machine trip back to the 60s – the days of go-go boots, through disco to flower power – and sun, sand, lifeguards, and romantic evenings “Under the Boardwalk.”

The jukebox musical “The Bikinis,” created and written by Ray Roderick and James Hindman, opened the Depot Theatre’s season with a bang. The loosely constructed plot concerns a 60s pop girl group reunited 30 years later at a benefit to save their beloved New Jersey beach settlement Sandy Shores from developers. The 26 familiar songs plus a couple of originals tell the stories of the group’s career and their lives with some entertaining twists. It’s great fun, especially for anyone who remembers that decade.

The four ladies are powerhouse singers and performers with a great vocal blend. On the group vocals their voices blend so well it’s difficult to tell who’s singing the solos. Music Director/Pianist Joe Schermann did a terrific job and Jim Carroll’s sound is excellent – never over-miked. Craig Johnson’s tasty drumming adds to the proceedings. 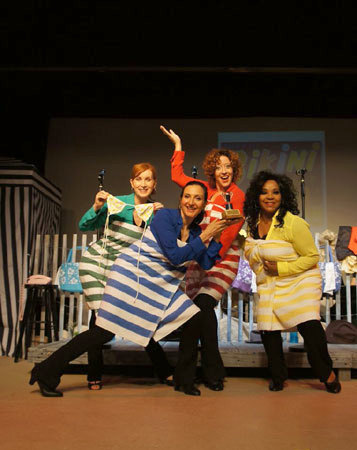 As the business-like lawyer, Jeneen Terrana does a surprisingly funny Elvis impersonation on “Secret Agent Man,” while Annie Edgerton as her sister Annie gives a hilarious performance of Nancy Sinatra’s “These Boots Are Made for Walkin’.” Jane Cooke is excellent as the slightly dim housewife Karla and shines as an elderly Mafioso in the section about singing at ethnic weddings. As Barbara, Johnetta Alston Lake has great fun with “Heat Wave” and just about blows out the back wall on “I Will Survive.”

Bonnie Brewer’s colorful beach set works very well. There are two small changing tents with a dune fence between them hung with props and costume pieces, and a low platform in front of the fence for the mikes. No designer is credited for the costumes, but they are great and very clever. Margaret Swick’s lighting is very good and I liked the projections of photographs that carry us from the twist through flower power.

Director/Choreographer Katy Blake did a splendid job and the pace never lags. Her back-up choreography is terrific and the staging of “Be My Baby” and the disco section are especially good. I loved the 60s dances and remember them both well and painfully, since I worked a week as a go-go dancer. (A week was all I could take!) The surprise curtain call is fun and clever.

All in all “The Bikinis” is great summer fare. There is nothing wrong with fluff, especially when it’s this well done. The play even manages to work in “Beach Blanket Bingo” and Frankie Avalon. The audience had a great time and so did I.

On a scale of one to five, the Depot Theatre production of “The Bikinis” gets five boxcars. For North Country Public Radio I’m Connie Meng.