THE ADDAMS FAMILY – A Review 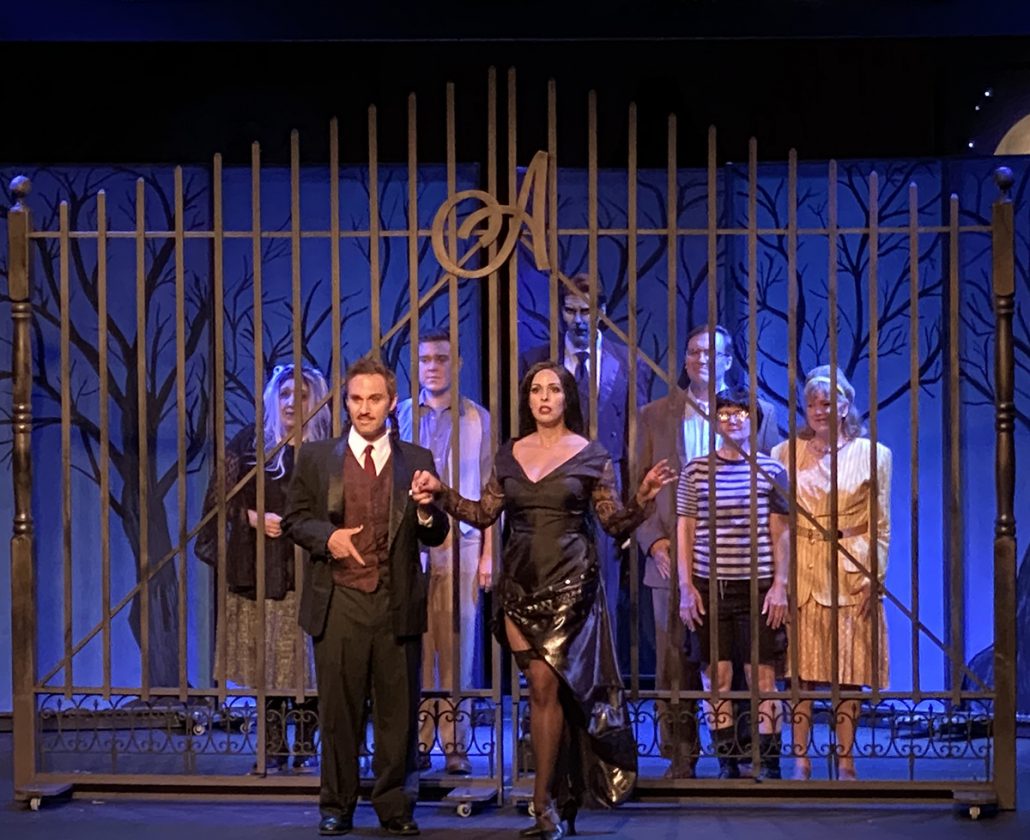 The Depot Theatre’s production of THE ADDAMS FAMILY: A NEW MUSICAL is on stage through August 28, 2022.

The Addams Family brand just won’t die. But of course.

Born in 1938 as a series of one-panel cartoons, this ghoulish family has lived through the generations as cartoon, TV show, film, video game, dance move, and musical comedy.

Broadway critics tried to drive a stake through the family’s heart a dozen years ago when the original Addams Family musical was introduced, with reviews filled with what cast members called “absolute cruelty and vitriol.” Gomez and Morticia would have approved.

But critics and paying customers didn’t, and the production was hastily retooled, after which it rose from the dead and became a nationwide hit.

The Addams Family opened as the final presentation of the Depot Theatre’s 2022 summer programming on August 11, a fittingly light and fun show which, like an August shower, brings relief to a summer filled with heavy and somber events.

The fast and funny musical is a bright production of song, dance, and doom that will satisfy Addams Family groupies, while being relatable to those who are unfamiliar with the Addams oeuvre, perhaps because they have been living under a rock. Or a tombstone.

If the current American condition has you down, fear not, the Addams Family will not require you to think. When Morticia has to stop and explain one of her zingers — death is just around the coroner — we understand the audience is in no mood for heavy lifting.

But that’s the gift of The Addams Family, a black-costumed Rumpelstiltskin, spinning grins out of gore, a clan that views flowers as tasteless and the color yellow as a fashion faux pas (they may have a point on that one).

The show opens in a cemetery, naturally, with the family paying tribute to their dead ancestors, along with the gifts of “darkness, grief, and unspeakable sorrow.” Having defined themselves in the opening song “When You’re an Addams,” we learn there are storm clouds of happiness in the family’s horizon.

Wednesday, played by the golden-throated Lauren Gunn, has fallen in love with a cherub-faced boy from Ohio (Dru Loman), who is capable of overlooking his partner’s quirks, such as, in Wednesday’s case, plucking pigeons out of the sky with a crossbow.

Of course in the Addams’ family, love is a complicated subject. Despite feasting on Gomez’s over-the-top devotion, Morticia — wonderfully portrayed by Megan Koumis, whose fickle countenance can flip from beauty to bird of prey in a flash — is not sold on the idea.

But define normal. Held up against an all-American, domineering husband and repressed, conflict-averse wife (Brenda Chase McColgan), the crypt doesn’t seem all that bad.

The two-and-a-half hour show depends largely on Gomez to keep the momentum going, and Michael Indeglio is up to the job as a debonair, silver-tongued Spaniard whose energy and creativity at extracting himself from the multiple pickles, keeps the show moving.

The death-related puns, of which there is no shortage, are delivered by both Gomez and Morticia with just the right dose of ironic self-awareness to make them fresh and funny instead of boorish.

Both are strongly supported by the familiar ghoulish faces of Uncle Fester (Vincent DiGeronimo), Grandma (Gina Lindsey), and Lurch (Michael Glavan). Fester, don’t be fooled by the dead, hollow eyes, is obsessed with love — both Lucas and Wednesday’s, and his own romance with the moon. And for true Addams Family fans, of course, Lurch is the chocolate chip in the cookie, and Glavan doesn’t disappoint, packing as much meaning into a groan as many a Shakespearean line.

The Depot is community oriented, and The Addams Family had a strong community touch, with references to Ballard Park and the introduction of the impressive Felix Haskins, Westport’s own, as Pugsly. As much as Fester tries to foster the happy couple, Puglsy wants the opposite, for fear that Wednesday will no longer have time to torture him, nail his tongue to the floor, and engage in other wholesome family activities.

Early on, Uncle Fester telegraphs the inevitable happy ending — or in the Addams’ eyes, does that make it an unhappy ending? The script leans a bit too heavily into the romance side of things — no one came expecting the Addams Family to explain to us what love is — but makes up for it with playful takes on craziness and abnormalities.

As a television show, The Addams Family lasted only two seasons, but they were fertile ones, spawning a cult following, and the immortality that comes with afternoon reruns.

The Depot’s The Addams Family is contemporary enough to include a handful of relevant political quips. But it also reaches back to c. 1930s Addams Family cartoons for inspiration — in an early panel, Morticia and Gomez talk of how they love horror films because it reminds them of their first date; in the musical, 80 years later, they reminisce about laughing at Death of a Salesman. Some jokes never die.