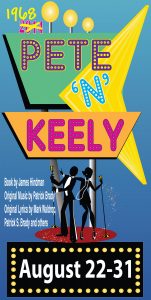 Westport, N.Y. – The Depot Theatre 2014 season concludes with a limited engagement of PETE ‘N’ KEELY which runs from August 22-31.

In this upbeat musical, the Depot turns back the clock to 1968 and transforms itself into a NBC studio where America’s favorite singing duo Pete ‘n’ Keely reunites in this “live” television broadcast. Despite their recent acrimonious divorce these brave, talented kids are only coming back to please their fans. This musical from the director of When Pigs Fly and the producer of The Mystery of Irma Vep features unforgettable renditions of the era’s popular favorites as well as original songs in the spirit of the times. Tunes, hilarity, and sparks are guaranteed to fly!

The show is directed by Vermont native, and NYC-based actor/director Kathryn Markey (Regional: Fiddler on the Roof, Over the Pub, Deathtrap, South Pacific, Carousel) and stars Katy Blake (Broadway tour of Mamma Mia) and the Depot’s own interim producing director Jonathan Hadley (Broadway & International Tour of Jersey Boys). Joe Schermann returns to the Depot a second time this summer as the musical director, having just completed the smash-hit My Way: A Musical Tribute to Frank Sinatra last month. The final production of the Depot Theatre season is sponsored by Skidmore College.

Prior productions of PETE ‘N’ KEELY have received rave reviews including:

“The brightest, happiest, and most entertaining little show in town.” – New York Observer 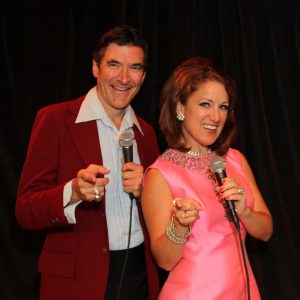 KATY BLAKE has been singing and dancing since she was four years old when she debuted as “child #2” in The Elixir of Love – an opera in which her mother and father both performed with the Virginia Opera Society. She’s been hooked ever since. Most recently, Katy was seen at the Signature Theatre in the new musical, Sweetie, directed by the legendary Pat Birch. Last summer, she performed the role of Grizabella in CATS at Theatre by the Sea and at North Shore Music Theatre to rave reviews. She created the role of Jesse in the Off-Broadway NYMF production of Greenwood and originated the role of Pam in the pre-New York tryout of The Last Smoker In America. Audiences around the country have seen her singing and dancing to ABBA music in the national tour of Mamma Mia. Before that, she was at the Pasadena Playhouse creating the role of Sirocco in the world premiere of Mask, directed by Tony award winner Richard Maltby, Jr., written by Oscar winner Anna Hamilton-Phelan, and music by Grammy winners Barry Mann/Cynthia Weill. She performed with Reba McEntyre in the Hollywood Bowl production of South Pacific, and was in the world premiere of Andrew Lloyd Webber’s Whistle Down the Wind. Katy played the title role of Eva in the 20th anniversary production of Evita, and played Christine in the San Francisco Company of The Phantom of the Opera. Katy has also performed in many different theatres off-Broadway and regionally. She has been in industrial shows around the country for such clients as IPOP, The Wynn Las Vegas, The Bellagio New Year’s Eve, Shaklee, and The Grammy Awards After Party, to name a few. Katy is an accomplished country singer/songwriter and has a CD of her original music available at www.katyblake.com

JONATHAN HADLEY most recently appeared on Broadway as “Bob Crewe” in the hit musical Jersey Boys, a role he then played for five years on the First National U.S. Tour, as well as in Seoul and Kuala Lumpur. He was previously seen on Broadway channeling Marvin Hamlisch and Michael Bennett in A Class Act and Off-Broadway in Finian’s Rainbow and Peg O’ My Heart at New York’s acclaimed Irish Rep. Tours include Into The Woods (with Cleo Laine), Joseph…(with Donny Osmond), Fiddler on the Roof (with Theo Bikel) and Forbidden Broadway in the US and Australia. Favorite regional credits include leading roles in Dirty Blonde, Born Yesterday, Yiddle With A Fiddle (Boston Herald Award), Amadeus, Loves Labors Lost, Call Me Madam (starring Leslie Uggams), The Secret Garden and Captains Courageous. TV: “Another World,” “Kidsworld” & “Sex and the City.” Jonathan is a director and teaching artist with Camp Broadway, TADA!, the Yip Harburg Foundation’s “Rainbow Troupe” and BRAVO’s “On With the Show.” He directed Much Ado About Nothing and Tartuffe for New York’s Sonnet Repertory Theatre and Spring Awakening for Brooklyn College. Jonathan holds a BFA in Acting from the University of the North Carolina School of the Arts and an MFA in Directing from Brooklyn College.

ABOUT THE DIRECTOR – KATHRYN MARKEY

Pete ‘n’ Keely marks KATHRYN MARKEY’s directing debut at the Depot Theatre. Directing credits: Fiddler on the Roof, Over The Pub, Around the World in 80 Days, Fox on the Fairway (St. Michael’s Playhouse) Deathtrap & Boeing, Boeing (Mason Street Warehouse) South Pacific & Carousel at the New London Barn, Ragtime at the White Plains Performing Arts Center and David & Goliath at Merkin Concert Hall. Performing credits range from Broadway (3 From Brooklyn) to many NYC and regional stages including The Alliance, Symphony Space, Bay Street Theater, Pennsylvania Stage, Gayfest NYC, Northern Stage, The Emelin and Penguin Rep. On-screen: Law and Order, Premium Blend, All My Children, Filmic Achievement, DutchWest TV, CollegeHumor and Amateur Hour. Kathryn is the creator of the satirical country band The Chalks, seen and heard regularly in bars, on TV and the internet. 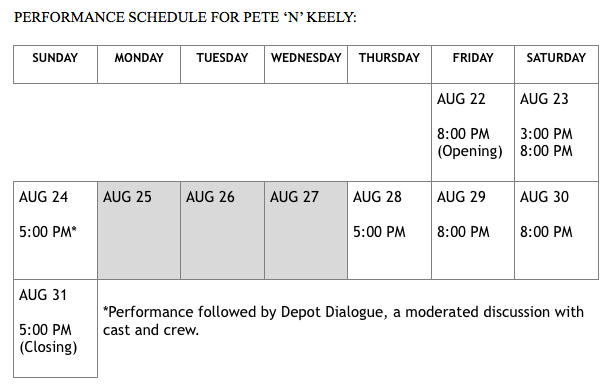