[This theatre review of “Greater Tuna” by Connie Meng was aired and published by North Country Public Radio as “Theatre Review: ‘Greater Tuna’ at the Depot Theatre in Westport NY” on August 04, 2014. Listen to the story.]

The two-man comedy “Greater Tuna” opened Off-Broadway in 1982 to rave reviews. It’s been an audience favorite ever since. It runs at the Depot Theatre through August 17. 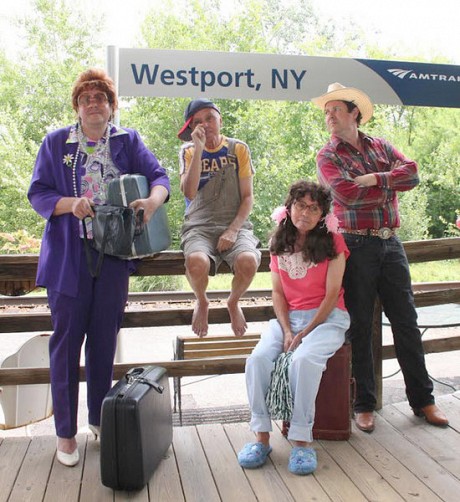 “Greater Tuna” by Jaston Williams, Ed Howard and Joe Sears is a show that provides the opportunity for a tour de force by the two actors involved.  Amidst the laughs and giggles it has some pithy things to say.  Although it’s set in Tuna, the third smallest town in Texas, similar characters exist in rural areas throughout the country.  They just may not have that Texas drawl.

The framework for the piece is a local radio show hosted by Arlis Struvie played by Tripp Plymale and Thurston Wheelis played by Chan Harris, who also directed.  Through call-ins, interviews and commercials we meet several Tuna residents.  The two actors play town big-wigs and the members of a dysfunctional family – young, old, male, female, and even a very noisy dog.

Bonnie Brewer’s simple set of two tables with chairs and a big cabinet radio up center is backed by a nice three-part painting of east Texas fields.  Margaret Swick’s lighting is just fine.  I assume the multitude of costumes were a group effort and work very well.  Kudos to whoever’s backstage helping with the lightning fast changes.

Chan Harris is very good as Pearl Burras, local chicken farmer and dog poisoner.  I love the scene in the funeral parlor with Pearl’s serenade to the dead Judge and the comment, “You look so… waxy.”  As the energetic Reverend Spikes he gives a very funny eulogy made up entirely of platitudes and song lyrics.  He’s also excellent as Bertha Bumiller, harassed mother of three.  We know exactly how she feels about her husband when we watch her chop vegetables. By the way, he also plays her husband. 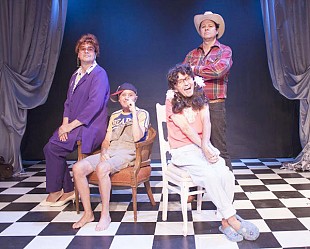 Tripp Plymale is terrific as snippy Vera Carp, head of the Smut Snatchers of the New Order who plan to clean up the high school dictionaries. Her reactions to Reverend Spikes are hilarious.  He’s excellent as gentle Petey Fisk, protector of lost animals including ducks.  Mr. Plymale gives all his characters unexpected depth and three-dimensional humanity.  This is especially so with the three Bumiller children: forlorn young Jody whose only friends are the dogs who follow him around, overweight Charlene, shy amateur poet and failed cheerleader, and fresh out of reform school Stanley, his edgiest character.  Stanley’s powerful scene with the dead Judge takes a sudden twist and ceases to be funny.

The juxtaposition of prayers in Act II is funny, chilling and touching by turns.  That of Elmer Watkins, NRA member, reminds us that bigotry isn’t always to be laughed at, while that of Petey Fisk is very moving.  Director Harris has also chosen great songs that perfectly set up the atmosphere.

“Greater Tuna” is a very funny play with some wonderful serious moments.  Mr. Harris and Mr. Plymale have brought out all the nuances of the piece.  Its mixture of affectionate comment and dark satire provides a solid evening’s entertainment at the Depot Theatre.

On a scale of one to five the Depot Theatre’s production of “Greater Tuna” gets four and five-eighths box cars.  For North Country Public Radio I’m Connie Meng.