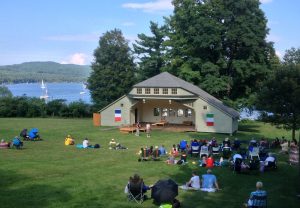 The Depot Theatre Young Actor Apprentice Program is dedicated to the professional training of young actors in classical theater. The 2015 program will present “The Lion, the Witch and the Wardrobe”, and will be directed by Lindsay Pontius and Scott Gibbs, both experts in theatrical training and longtime associates of the Depot Theatre.

The program is offered free of charge, and will consist of rehearsals  beginning Tuesday, July 7, four afternoons (Mon. – Thurs.) a week from 4pm to 6pm at Ballard Park in Westport, N.Y, Ballard Park features an outdoor stage, a life-guarded beach, and places to grab a snack just a block away. The Young Actor Apprentice Program is sponsored in-part by Stewart’s Shops Holiday Match Program.

In addition to the Young Actor Apprentice Summer Program, the Depot Theatre is also pleased to administer the JM McDonald Foundation Apprentice Program. The 2015 Summer Apprenticeship was awarded to Westport students Tommy Maron and Scarlett Moore, who will be completely immersed in the Depot Theatre’s summer theatre season, with responsibilities ranging from assisting with the building of sets, with costumes and props, to helping with promotion to conducting backstage support during performances. This program is supported with a grant from the JM McDonald Foundation.

“The Depot is dedicated to supporting arts education programs for aspiring theatre artists in our community,” said David Howson, president of the Depot Theatre board of Trustees. “We’re pleased to have two programs in place for the 2015 summer season.”

Young people interested in participating in the Apprentice Summer Program’s training and production of “The Lion, the Witch, and the Wardrobe” should contact Scott Gibbs at gibbss@westelcom.com or 962-4916 for more information and to register.