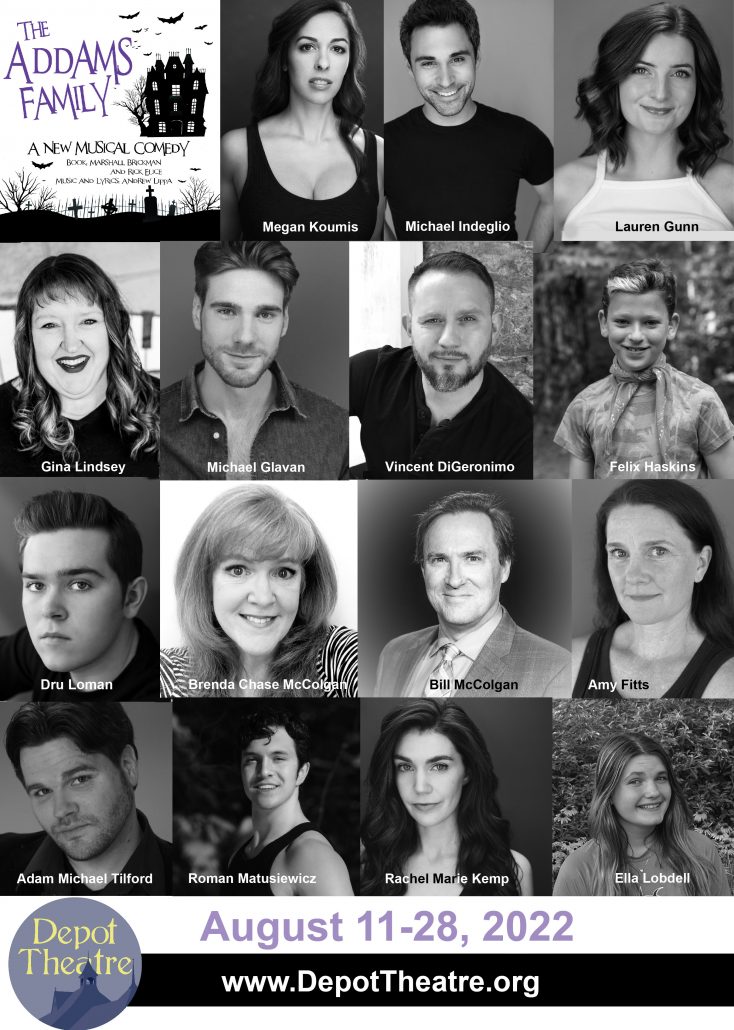 The Depot Theatre is pleased to announce the cast of its production of THE ADDAMS FAMILY: A NEW MUSICAL, with performances from August 11-28, 2022.

“As an Actors’ Equity Association-affiliated theatre, we always engage some non-Equity members along with Equity professionals for our productions,” said Kenney Green, the show’s director/choreographer and Depot Producing Artistic Director. “But this show is a much larger scale than usual, and only possible because we have engaged the triple-threat talents of our community members and Academy standouts.”

The show is based upon The Addams Family characters created by Charles Addams in his single-panel gag cartoons, which depict a ghoulish American family with an affinity for all things macabre.

The plot features the Addams Family’s dark, macabre, beloved daughter Wednesday, now an eighteen-year-old young woman, who has fallen in love with a sweet, smart boy from a “normal” family. To make matters worse, she has invited his parents to the Addams’ home for dinner. The result is a “comical feast set to music!”

Megan Koumis (Morticia) returns to the Depot after performing in THE WORLD GOES ‘ROUND in 2019. Megan made her off-Broadway debut at The Public Theatre in MADE IN AMERICA. She has been seen regionally in EVITA, JEKYLL AND HYDE, JOSEPH…DREAMCOAT, and AROUND THE WORLD IN 80 DAYS. Megan can also be seen in the national commercial for Keepsake Frames.

Michael Indeglio (Gomez) has performed on 6 of the 7 continents with tours including TITANIC, MAME, and FOREVER PLAID; select regional productions include THE WORLD GOES ‘ROUND (Depot), TICK TICK…BOOM, THE LAST FIVE YEARS, LITTLE SHOP OF HORRORS, and THE FULL MONTY.

Lauren Gunn (Wednesday) returns to the Depot after this season’s PUTTING IT TOGETHER. Gunn’s favorite credits include ASSASSINS (Squeaky), INTO THE WOODS, (Cinderella), HAY FEVER (Jackie), MEASURE FOR MEASURE (Pompey), and THE TAMING OF THE SHREW (Bianca). She has composed comedy songs for her series, “Eh, OK”, and written pieces for the NYC sketch collective, Boogiemanja.

Gina Lindsey (Grandma Addams) teaches communication in Plattsburgh at both Clinton Community College and Plattsburgh State University. She has been performing in local theatre since 2003. Favorite roles include Enid in LEGALLY BLONDE THE MUSICAL (CCC, 2014), Mae Peterson in BYE, BYE BIRDIE (CMT, 2015), Lucy the Slut in AVENUE Q (CCC, 2016), Eleanor in the original musical, THE ART OF LIVING (CCC, 2016, and The Strand, 2017), Sister Mary Regina in NUNSENSE II: THE SECOND COMING (ART and ETC, 2018), Elizabeth Proctor in THE CRUCIBLE (ART 2019), Mrs. White in CLUE ON STAGE (CCC, 2019), and Beatrice in THE EFFECT OF GAMMA RAYS ON THE MAN-IN-THE-MOON MARIGOLDS (ETC, 2021).

Michael Glavan (Lurch) has worked as an actor, director, playwright, and teaching artist across the country, and appeared in this season’s Depot Theatre production of RED. NYC/Off Broadway credits include ULTIMATE MAN!, AMERICAN HERO, THREE SISTERS, SEX TIPS FOR STRAIGHT WOMEN FROM A GAY MAN, MIRACOLO, and ETHEL. TV appearances include SHAHS OF SUNSET and WATCH WHAT HAPPENS LIVE WITH ANDY COHEN.

Vincent DiGeronimo (Uncle Fester) is a singer/songwriter as well as an actor, and is making his Depot Theatre debut. He has played Seymour in LITTLE SHOP OF HORRORS in NYC, Charlie Davenport in ANNIE GET YOUR GUN at the Pines Dinner Theatre, has worked on two shows in the NYC Fringe Festival (I CAN HAS CHEEZBURGER THE MUSICLOL and PROPHET IN PINK), and was in ALWAYS, RACHEL as part of the NYMF.

Felix Haskins (Pugsley) is a twelve-year-old Brooklyn-born Westport resident making his professional debut in THE ADDAMS FAMILY. Previous roles in the Depot Academy include Jack (INTO THE WOODS) and Simba (THE LION KING). In his free time, Felix enjoys making art, playing the cello, swimming, and having fun with his friends.

Brenda Chase McColgan (Alice) is a special needs aide by day, theatrical performer by night. Brenda is proud to be considered local talent, appearing as The Witch in INTO THE WOODS, Linda Porter in the one woman show LOVE, LINDA, Mary Bailey in IT’S A WONDERFUL LIFE, and performing Broadway standards with her husband at the Curbside by the Harborside Concert Series. Treasured roles from her life in Massachusetts include, Hannigan in ANNIE, Agnes in I DO, I DO, The Mistress in EVITA and The Beggar Woman in SWEENEY TODD, as well as her run in I LOVE YOU, YOU’RE PERFECT, NOW CHANGE with Showstoppers Inc.

Local audiences may know Bill McColgan (Mal) from ACT’s INTO THE WOODS (The Baker) and HELLO, DOLLY! (Horace), ART’s THE PRODUCERS (Max) and IT’S A WONDERFUL LIFE (George), and Plattsburgh’s Harborside Concert Series. Favorite shows/roles include URINETOWN (Lockstock), CHILDREN OF EDEN (Father), ME & MY GIRL (Bill), FORUM (Miles Gloriosus), and LES MISERABLES (Bishop), along with the murderous trio of Jasper in EDWIN DROOD, Jud in OKLAHOMA!, and the title role of SWEENEY TODD. Professional experience includes I DO! I DO! as Michael, SUGAR as Jerry/Daphne, the New England premiere of SECRETS EVERY SMART TRAVELER SHOULD KNOW, and more than 300 performances in Boston and around the country as Smudge in FOREVER PLAID.

The cast is rounded out with a talented ensemble that includes Depot alums Amy Fitts, Roman Matusiewicz, and Adam Michael Tilford, and Rachel Marie Kemp and Depot Academy alum Ella Lobdell in their Depot debuts.

Tickets can be purchased ONLINE or by calling the box office at 518.962.4449. More details, additional events, and news updates can be found online at DepotTheatre.org. The Box Office is open 1PM-5PM or 1PM-Showtime on performance days. Closed Tuesday.

The Depot Theatre is a non-profit, professional theatre located in a historic, functioning 1876 train station in Westport, N.Y., and it is the only theatre in the Adirondacks that operates under an agreement with Actors’ Equity Association, the Union of Professional Actors and Stage Managers in the United States. In addition to its volunteer board of trustees, the theatre depends on the support and generosity of its loyal donors, volunteers and community members. Committed to promoting and providing exposure to the performing arts in the Adirondacks, the Depot Theatre invites all to “Take a journey without leaving the station.” The Depot Theatre’s 2022 programming is made possible by the New York State Council on the Arts with the support of the Governor and the New York State Legislature. Additional support is provided by the Adirondack Foundation – Generous Acts Fund and the Essex County Arts Council.