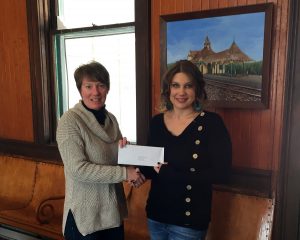 Westport, N.Y. – The Depot Theatre has been awarded a $4,000 grant from the Cloudsplitter Foundation for capital improvements to its artist housing.

As a professional theatre operating under an agreement with Actors’ Equity Association, the Depot is required to provide housing for its visiting artists who work at the theatre during its summer main stage season. The Cloudsplitter Foundation funds will be used toward improvements to the Depot-owned facilities, allowing the theatre flexibility to expand programming into the winter months.

Last year, Cloudsplitter awarded the Depot $2,000 toward Phase 1 of the project, which resulted in upgraded HVAC and new smoke/CO2 alarm systems among other improvements. “This award for continued progress on our project represents double the amount of Cloudsplitter’s previous grant,” said Kim Rielly, the theatre’s Executive Director. “We’re grateful for their ongoing support of our strategic goals, which include the ability for us to offer opportunities for year-round programs and creative collaboration, as well as a community meeting space.”

The Depot Theatre a non-profit, professional theatre located in a functioning, circa 1876 train station in Westport, New York. For more information about the theatre, visit www.DepotTheatre.org.

The Depot Theatre is a non-profit, professional theatre located in a historic, functioning 1876 train station in Westport, N.Y., and operates under an agreement with Actors’ Equity Association, the union of professional actors and stage managers in the United States. In addition to its volunteer board of trustees, the theatre depends on the support and generosity of its loyal donors, volunteers and community members. Committed to promoting and providing exposure to the performing arts in the Adirondacks, the Depot Theatre invites all to “Take a journey without leaving the station.” The Depot Theatre’s 2019 Season is made possible by the New York State Council on the Arts with the support of Governor Andrew Cuomo and the New York State Legislature. The season productions are made possible, in part, by the Essex County Arts Council’s Cultural Assistance Program Grant with funding provided by Essex County. The Depot Theatre’s 2019 Season is sponsored by the The Brooks and Joan Fortune Family Foundation.

ABOUT THE CLOUDSPLITTER FOUNDATION