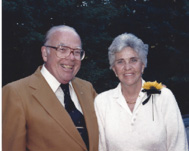 ​The Brooks and Joan Fortune Family Foundation is a charitable organization formed in 1988 to support education and the arts.

Initially incorporated in Indiana, the foundation has had a major impact throughout the country. Brooks and Joan met in 1939 when he was a young research scientist and she was a medical laboratory technician. Together, they worked on novel products that would allow diabetic patients to check glucose levels at home to better control insulin dosing. Eventually, these would evolve into the basis of all bedside medical testing available today. Their happy marriage of 49 years produced three successful children and a myriad of wonderful memories. Brooks rapidly rose through the leadership ranks of the Eli Lilly pharmaceutical company to eventually become an Executive Vice-president and member of the Board until his retirement in 1971. After that, Brooks and Joan travelled the world and graciously shared their homes in Florida and Indiana with friends and family. Always the philanthropists, they supported a myriad of projects in museums, colleges, and churches located near their home. The incorporation of the Foundation was an opportunity to expand the boundaries of their generosity to other areas of the country. Both Brooks and Joan are gone now, but their family legacy lives on through the Foundation which remains under the leadership of their children and grandchildren.