[This theatre review of “My Way” by Connie Meng was aired and published by North Country Public Radio as “Theatre Review: “My Way” at the Depot Theatre in Westport” on July 14, 2014. Listen to the story.]

“My Way: A Musical Tribute to Frank Sinatra” is a lively journey through the Sinatra song-book. It runs at the Depot Theatre overlooking Lake Champlain in Westport NY through July 27. 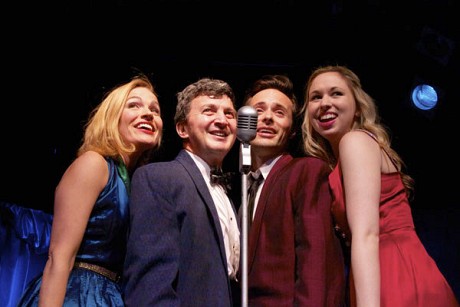 The Depot Theatre in Westport has opened their 36th season with a tuneful production of “My Way: A Musical Tribute to Frank Sinatra.”  Created by David Grapes and Todd Olson, the show contains over 50 songs out of the nearly 1400 Sinatra recorded.  Most of the songs are familiar, but there were a couple I hadn’t heard.  With having had only five days of rehearsal, even this old “lyric Nazi” can overlook a couple of slips.

The four cast members, ably accompanied by Joe Schermann in a pianistic marathon, are all very good singers with sparkling stage presence.  Erik Keiser is an appealing song and dance man and does a specially nice job on a duet with Maggie Politi of “Nice and Easy.” They do justice to the frisky staging of Director Evan Pappas.  Miss Politi is a natural comedienne and had me giggling with her take on “South of the Border.”

Tiffan Borelli is just an all-round good singer, who is particularly fine on various ballads.  Last but certainly not least is Paul Binotto, not only a good singer but an excellent actor who plays a mean guitar.  He’s especially strong on “One for My Baby,” “Young at Heart” and “Summer Wind,” all very different emotionally.

Music Director Joe Schermann has done a fine job on the many group vocals and the vocal blend is great on “My Way” and the encore, a lovely 4-part arrangement of “I’ll Be Seeing You.”

Bonnie Brewer’s simple set of draperies upstage, a grand piano, a short bar and a couple of small tables works extremely well for the show.  Her lighting is effective, complete with stars and a mirror ball.

Debbi Hobson’s costumes for the men are fine and allow for some versatility, while the dresses for the ladies, while well-designed and colorful, aren’t particularly flattering.

Director Evan Pappas has done a terrific job of staging a show that could easily have become static.  Especially clever are “It Was a Very Good Year,” “My Way,” “I’ll Be Seeing You,” “That’s Life” and the tour of the cities.  Perhaps my favorite was “I Only Have Eyes for You,” in an unusual arrangement, with great lighting and inventive staging.

If you like Frank Sinatra’s choice of songs this show is for you.  There are some snippets of dialogue, but it’s really about the music.  Sinatra was part of the music scene for so long that these songs will take you back no matter your generation.  “My Way” is solid entertainment – perfect fare for a summer afternoon or evening.

On a scale of one to five the Depot Theatre’s production of “My Way: A Musical Tribute to Frank Sinatra” gets four and one-third boxcars.  For North Country Public Radio I’m Connie Meng.