Westport, NY — The Depot Theatre in Westport, New York is pleased to announce the cast for its production of RED, a moving and compelling account of abstract expressionist Mark Rothko, one of the greatest artists of the 20th century. 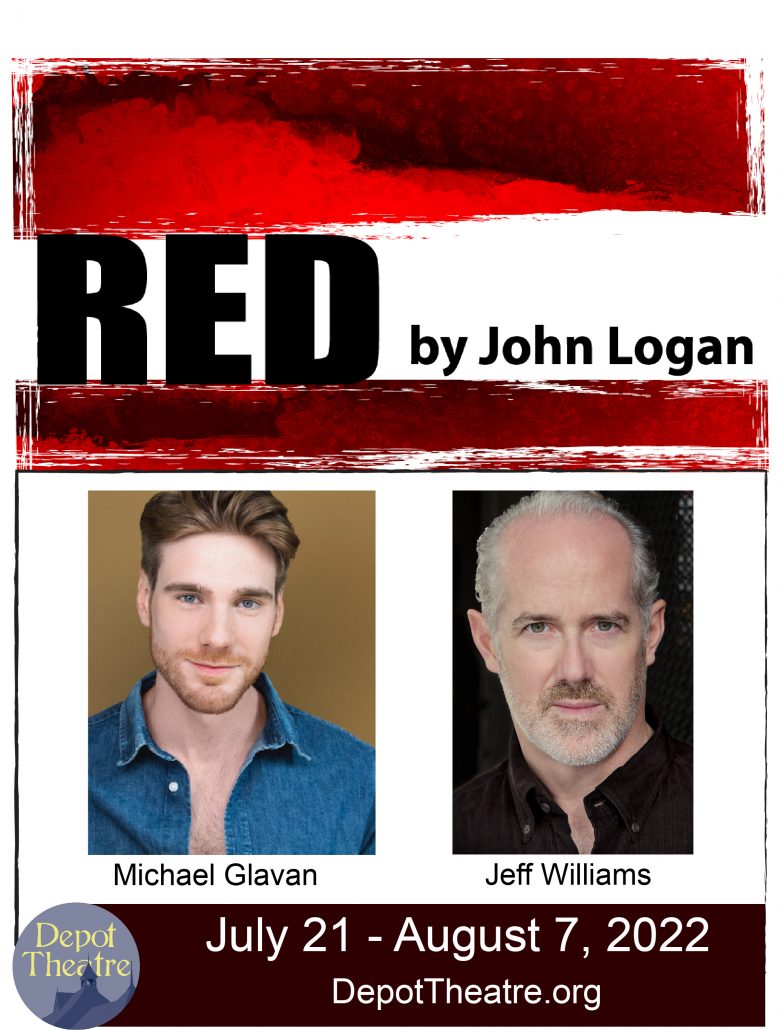 Based on the real-life commission Rothko received in 1958 to create a series of murals for the Four Seasons restaurant in New York, RED is viewed through the lens of his youthful new assistant Ken. They challenge each other to ask big questions about art as they paint: what it takes to create it and what its role should be in the world.

Jeff Williams will make his Depot Theatre debut in the role of Mark Rothko. A versatile actor, Williams’ Broadway and National Tour credits include THE MUSIC MAN, CHITTY CHITTY BANG BANG, THE PIRATE QUEEN, THE WILL ROGERS FOLLIES and A CHRISMAS CAROL. Regionally Jeff has appeared in productions of HAMLET, GOOD PEOPLE, SEMINAR, TO KILL A MOCKINGBIRD, ART, THE CRUCIBLE, THE SISTERS ROSENSWEIG, TERRA NOVA, OUTSIDE MULLINGAR and many others. TV credits include THE GOOD FIGHT, THE MARVELOUS MRS. MAISEL, WHEN THEY SEE US, TELL ME A STORY, ORANGE IS THE NEW BLACK, GOTHAM, TALES OF THE CITY, BULL, BLACKLIST, KIMMY SCHMIDT and THE SOPRANOS.

The role of his assistant Ken will be played by Michael Glavan. Michael has worked as an actor, director, playwright, and teaching artist across the country. NYC/Off Broadway credits include ULTIMATE MAN!, AMERICAN HERO, THREE SISTERS, SEX TIPS FOR STRAIGHT WOMEN FROM A GAY MAN, MIRACOLO, and ETHEL. TV appearances include SHAHS OF SUNSET and WATCH WHAT HAPPENS LIVE WITH ANDY COHEN.

“These two extraordinary actors are perfectly cast by Director Elliot Wasserman to relate this searing portrait of an artist’s ambition and vulnerability,” said Depot Theatre Producing Artistic Director Kenney Green. “We’re looking forward to featuring this one-act play that is both intense and provocative.”

RED opens with a $25 Preview Night on July 21 and runs through August 7, 2022. Tickets can be purchased online or by calling the box office at 518.962.4449. More details, additional events, and news updates can be found online at DepotTheatre.org.

The Depot Theatre is a non-profit, professional theatre located in a historic, functioning 1876 train station in Westport, N.Y., and it is the only theatre in the Adirondacks that operates under an agreement with Actors’ Equity Association, the Union of Professional Actors and Stage Managers in the United States. The Depot Theatre’s 2022 programming is made possible by the New York State Council on the Arts with the support of the Governor and the New York State Legislature. Additional support is provided by the Adirondack Foundation – Generous Acts Fund and the Essex County Arts Council.

The Depot Theatre Academy is a robust educational experience for area youth and a pathway for those interested in pursuing a profession in theatre—whether that’s backstage or on stage.