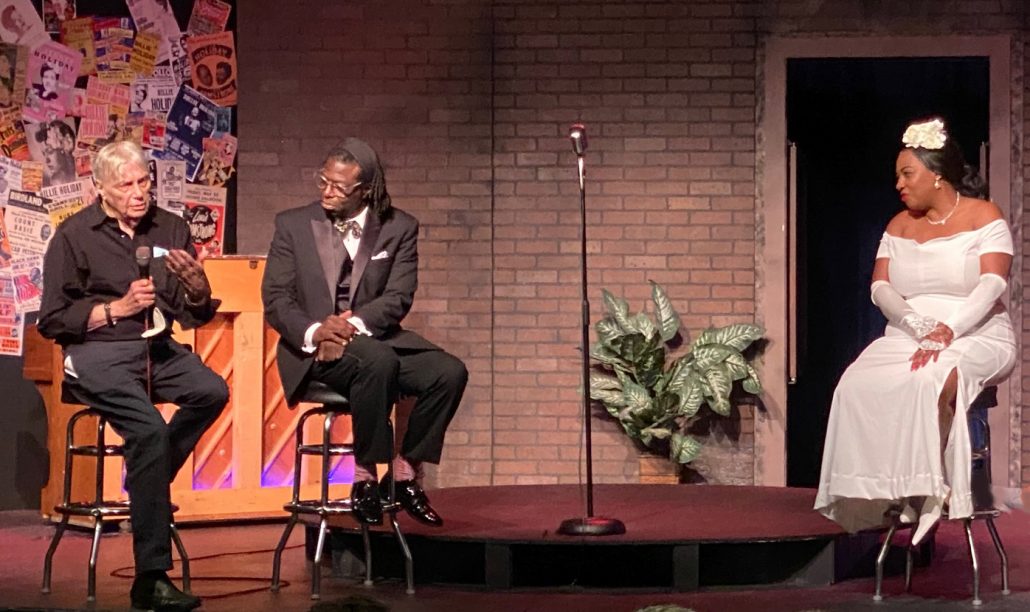 Playwright Lanie Robertson (L) joins actors Darnell White and Anna Anderson after a performance of LADY DAY AT EMERSON’S BAR AND GRILL at the Depot Theatre.

The subset of the American population who remember Billie Holiday in her prime is precipitously dwindling, meaning we are more likely to remember her music, but not her.

Some might argue this is for the best. Even in the lengthy canon of artistic tragedy, the woman born in Baltimore in 1915 as Eleanora Fagan takes the cake.

Lying on her deathbed, she was under police guard, as if the emaciated, scarcely conscious figure under the sheets, with few remaining friends and 70 cents in the bank would rise up and do — what, exactly?

Holiday died in 1959 at age of 44, her liver finally calling it quits after a life of drugs and drink. Yet her talent was not in dispute. At the tail end of the jazz age, she patterned her voice after the sassy trumpet strains of Louis Armstrong, creating a memorable sound that sold out Carnegie Hall and earned her a trophy case full of honors — most of which were bestowed upon her after she was dead.

The Depot Theatre examines her life in Lanie Robertson’s Lady Day at Emerson’s Bar and Grill, a play that debuted 32 years after Billie Holiday’s death. Set in a small club in March 1959, just months before she died, Lady Day is but a shell of the “old Billie” who was the Diana Ross or Nicki Minaj of her day.

Holiday, at first glance, might seem to herald the lives of Morrison, Joplin, Cobain, and Parsons, whose back stories often seem just shallow and sad if they seem anything at all.

But Depot Theatre artistic director Kenney Green is not in the business of exploring the mundane. Billie Holiday’s tortured existence played out against a backdrop of nightmarish racism and abuse, as opposed to more modern-day, privileged young rock and rollers, who can be thrown into deep depression if their allowance is late. 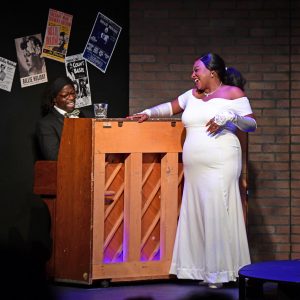 The reins of this show are placed in the eminently capable hands of Anna Anderson, who has brilliantly mastered the tones and inflections that made Billie Holiday’s voice so memorable and interesting, if not classically great. Anderson’s rendition of this playlist of songs stand on their own for Billie Holiday fans, but of course there is a lot more to the story.

Billie takes the stage unsteadily, supported by her pianist Jimmy Powers, played by Darnell White. As Jimmy takes his seat behind the piano, Billie cuts her eyes to him in fear, seeking assurance that the night will turn out all right, which of course it will not. This vulnerable glance might be the last we see of the real Billie before the booze starts doing the talking and the birdsong of her spine-tingling hits is interrupted more and more often by rambling sojourns into the past.

In a beautifully understated performance, White’s Jimmy lets us know that, most likely along with everyone else, he’s just about had it with Billie.

He wants the act to succeed, but he senses that ultimately it won’t — when Billie makes it triumphantly through the end of a song, his face reveals the terrified giddiness of one who has just managed to land an aircraft blindfolded.

Maybe out of respect, maybe because she’s his meal ticket, Jimmy does his best to hold the act together, enabling Billie’s addictions by making up a medical excuse when she flounces off the stage, and covering up the needle marks on her arm after she’s returned from shooting up. At one point he tries to do a little CPR on her mood, encouraging her to sing one of the old “good time songs.”

Anderson’s boozy Billie doesn’t really care what Jimmy thinks, and she makes no particular effort to make the audience like her, either. It’s way too late in her bruised and addled life for that.

While we feel pity, and maybe sympathy, for Billie, it stops there. For such a sad tale, there are no poignant moments that cause the eyes to well, or times when you want to put your arm around Billie and tell her “there there,” or, as Robin Williams repeated to Matt Damon in Good Will Hunting, “It isn’t your fault.”

It is only on this realization that we notice something else: When we see Billie Holiday, we are not seeing a Black musician, we are seeing the reflection of a thousand ugly abuses perpetrated by a racist White nation that have hardened her soul like bitter steel to the point where not even her humanity can shine through.

She recounts many of these incidents, but laughs them off, or frames them as jokes — “I’m kidding, I’m kidding,” when you know she is not, as evidenced by her selection of “Strange Fruit,” a song about Southern lynchings so searing that in her real life shows it was saved for last so she could be quickly hustled away from the venue, if necessary.

Lady Day leaves us with a lot of sorting out to do. It blames her addictions not on white people, but on a destructive relationship with a man who asked her to shoot up to prove her love. Without children, she had nothing to nurture. Her only solace is song.

In the end, as she is plunging into the depths that are about to claim her life, we root for Billie to gather herself, to pull it together, to stick the landing one last time like the “old Billie” belting out one of her hits. Because that’s what we care about. If only we had cared more about her.