Depot Theatre Announces Cast of PUTTING IT TOGETHER 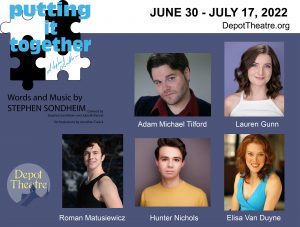 Westport, N.Y. — The Depot Theatre in Westport, NY is pleased to announce the cast of its 2022 season opener PUTTING IT TOGETHER, a celebration of the stage and screen work of multiple Tony Award-winner Stephen Sondheim.

A humorous, poignant, and sophisticated musical review, the show weaves a lyrical story around the emotions and relationships of five guests attending a Manhattan cocktail party, and it features material from a number of Sondheim’s works, including ANYONE CAN WHISTLE, COMPANY, FOLLIES, A LITTLE NIGHT MUSIC, SWEENEY TODD, MERRILY WE ROLL ALONG, SUNDAY IN THE PARK WITH GEORGE, and INTO THE WOODS.

The Depot production is the 1999 Broadway version of PUTTING IT TOGETHER, which originally ran at the Ethel Barrymore Theatre for 101 performances and 22 previews, with a cast that included George Hearn, who was nominated for the Tony Award for Best Actor for his role as Man #1, and Carol Burnett as his wife.

Adam Michael Tilford will play the role of Man #1. Tilford is a New York City based performer and educator. He has performed in regional theatres all across the country. Depot credits include ROUTE 66 and THE MARVELOUS WONDERETTES among others. Some other favorite roles include Gaston in BEAUTY AND THE BEAST and Radames  in AIDA. Adam is on faculty at AMDA in New York and is the Artistic and Musical Director at the Depot Theatre Academy.

Woman #1 will be played by Elisa Van Duyne, who has appeared on Broadway in 42nd STREET (Lorraine/Dorothy Brock cover), BEAUTY AND THE BEAST, 110 IN THE SHADE with Audra McDonald, and FINIAN’S RAINBOW (Sharon cover/Dance Captain).  Regional productions include RAGTIME (The Kennedy Center), SOUND OF MUSIC (Fulton Opera House), and Paper Mill Playhouse’s KISS ME KATE.  National & European tours: WHITE CHRISTMAS, DR. DOLITTLE.  PHANTOM OF THE OPERA. Favorite roles include Betty Blake in WILL ROGERS FOLLIES, Velma in CHICAGO, Milly in SEVEN BRIDES …BROTHERS, and Young Little Edie in GREY GARDENS.  Appeared TV credits: PERSON OF INTEREST, AS THE WORLD TURNS, THE LATE SHOW WITH DAVID LETTERMAN, GOOD MORNING AMERICA, THE 2001 TONY AWARDS, and the MACY’S THANKSGIVING DAY PARADE.  As a choreographer, she has staged THE WHO’S TOMMY, GUYS AND DOLLS, and BIG RIVER at Alpine Theatre Project, OKLAHOMA at Seton Hall University, THOROUGHLY MODERN MILLIE at Ocean County Professional Theater, and COMPANY at Middlebury College.  Other choreographic work includes tap theater pieces for BC/EFA cabaret benefits across the nation. She served on the faculty at American Music and Dramatic Academy in NYC, Paper Mill Playhouse in NJ, and Flynn Center For Performing Arts in VT.

The role of Woman #2 will be played by Lauren Gunn. Gunn’s favorite credits include ASSASSINS (Squeaky), INTO THE WOODS, (Cinderella), HAY FEVER (Jackie), MEASURE FOR MEASURE (Pompey), and THE TAMING OF THE SHREW (Bianca). She has composed comedy songs for her series, “Eh, OK”, and written pieces for the NYC sketch collective, Boogiemanja.

Roman Matusiewicz is making his professional debut in PUTTING IT TOGETHER (Man #2). Roman has been tirelessly pursuing the arts as an actor, musician, vocalist, and composer. Born in Wisconsin, he moved to New York and continued his training at the American Musical and Dramatics Academy. He also is a committed weightlifter and fighter.

The role of the Observer will be played by Hunter Nichols, who is a professionally trained singer, actor, and dancer in New York City with over 6 years of experience. He has played a diverse range of roles such as Prince Eric (LITTLE MERMAID) and Sky (MAMMA MIA). He has been trained by Broadway professionals in intensives such as CCM Summer Program and Destination Broadway. He has notably been featured on the Feinstein’s/54 Below stage in a miscast concert, NORTHSHORE VS. WESTERBERG this year.

“We’re thrilled to showcase this talented cast in this musical tribute to the foremost theatrical composer/lyricist of our time, who passed away in 2021 at the age of 91,” said Kenney Green, the Depot’s Producing Artistic Director. “This review is a wonderful compilation of his work encapsulated in a highly entertaining story!”

Tickets can be purchased online or by calling the box office at 518.962.4449. More details, additional events, and news updates can be found online at DepotTheatre.org.

PUTTING IT TOGETHER
July 1 – July 17, with a $25 Preview on June 30
Words and Music by STEPHEN SONDHEIM
Devised by Stephen Sondheim and Julia McKenzie
Orchestrations by Jonathan Tunick