Westport, N.Y. — The New York State Council on the Arts (NYSCA) has increased its commitment to the Depot Theatre with a grant of $15,000 per year for each of the next two years. The multi-year general-operating support grant is the largest NYSCA award to the Depot in eight years.

NYSCA grants are awarded in 15 programs and the Regional Economic Development Council initiative in all 62 counties to support the creation of visual, performing, literary and media arts. The Depot Theatre is one of seven non-profit arts organizations (including two theatre companies) in Essex County to receive funding this year.

“This more than doubles our annual allocation over our previous grant,” said Amy McNamara, president of the Depot Theatre Board of Trustees. “On behalf of the Depot, we are grateful to Governor Cuomo, the New York State Legislature and, especially, the dedicated staff at NYSCA for their continued confidence in the mission and direction of the theatre.”

“NYSCA recognizes and supports the importance of the arts to our communities,” said New York State Senator Betty Little, who is a member of the Cultural Affairs, Tourism, Parks and Recreation Committee. “The State’s continued commitment to the Depot Theatre, especially during its 40th anniversary season, is a testament to the organization’s significance in the overall cultural landscape in the Adirondacks.”

In 2017, the Depot Theatre replaced the seating and carpeting in its 134-seat theatre. The project was funded in-part by a facilities program grant from NYSCA.

The Depot Theatre is a non-profit, professional theatre located in a historic, functioning 1876 train station in the Adirondacks, and operates under an agreement with Actors’ Equity Association. Celebrating its 40th anniversary season in 2018, the theatre currently offers 3-4 productions in the summer along with educational outreach programs. For more information about the Depot Theatre, visit depottheatre.org or call 518.962.4449. 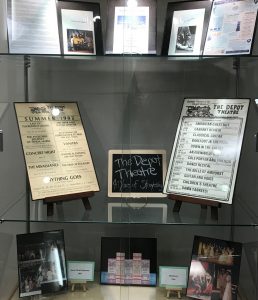 As the Depot Theatre nears its fortieth anniversary season, I have had the privilege of looking through its past—in the form of photographs, playbills, press releases, and much more.

The Depot Theatre and Skidmore College began the project of archiving past materials in the spring of 2017, with the MDOCS (John B. Moore Documentary Studies Collaborative) class “Archival Storytelling,” taught by Jordana Dym. The class recovered extensive archives from the Depot Theatre, and began the process of cataloguing and interpreting the story of the organization. Senior Geoffrey Greene continued the project over the summer of 2017. He has played a fundamental role in scanning and digitizing the collection, which beings in 1978, forty years ago.

I am excited to continue this project in 2018, and share the archives online. As the Depot Theatre celebrates forty years of history, be on the lookout for releases of archival material, both through the website as well as social media!

Lindsey Poremba is a senior at Skidmore College. She is from Brookline, New Hampshire, but in the past few years has grown to love living in upstate New York. At Skidmore, she is studying art history and arts administration, which led her to learn about the Depot Theatre, and the Westport community. This semester, she is continuing the work of archiving visual materials for the Depot Theatre.